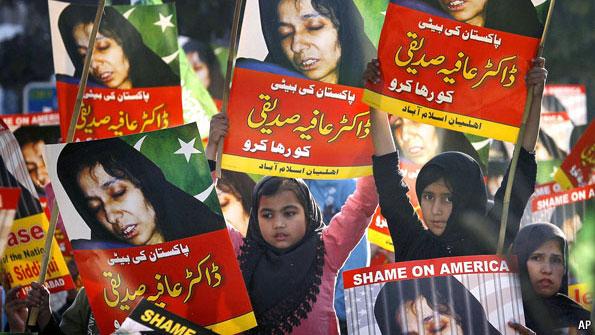 Wanted Women: Faith, Lies, and the War on Terror: The Lives of Ayaan Hirsi Ali and Aafia Siddiqui. By Deborah Scroggins. Harper; 539 pages; $27.99. To be published in Britain in February by HarperCollins; £16.99. Buy from Amazon.com, Amazon.co.uk

AYAAN HIRSI ALI and Aafia Siddiqui are forceful, intelligent women who were born around 40 years ago in the heart of the conservative Islamic world, into families of some prominence. Later, they moved to America. Like tens of millions of others who made similar journeys, they had to negotiate the interface between an immigrant sub-culture that harked back to the homeland and a liberal society where very different options existed. Presented with two sharply contrasting value systems, two diametrically opposed ideas about the meaning of virtue, success and fulfilment, they had to make their choices.

There, it would seem, the resemblance ends. Somali-born Ms Hirsi Ali is an admired public intellectual who denounced Islam as an oppressor of her sex and the source of many other woes. Ms Siddiqui is serving an 86-year prison sentence in Fort Worth, Texas, after being convicted of shooting at the American officers detaining her in Afghanistan. A Pakistani-born neuroscientist who excelled in her studies at leading American universities, she has been described as the only senior female member of al-Qaeda and “the most wanted woman in the world”. Her alleged complicity in terrorist plots has not been tested in court (her trial had a narrower remit) but there is no doubting her jihadist zeal.

As Deborah Scroggins, an American journalist, recalls in this gripping and finely textured double biography, the two women’s marital histories are also different. Ms Hirsi Ali is now wedded to Niall Ferguson, a British-born historian, forming one of the world’s most lionised couples. Their son was born last month. Formally speaking, her first marriage was an arranged union with a fellow Somali who wanted to take her to Canada. Ms Hirsi Ali instead sought asylum in the Netherlands. Eventually she became its best-known politician after her artistic collaborator (on a film denouncing Islam’s cruelty to women) was murdered by a Muslim extremist and her own life needed protecting.

Ms Siddiqui, who seemed to personify the very demons that Ms Hirsi Ali was fighting, married the nephew of Khalid Sheikh Mohammed, the alleged mastermind of the September 11th 2001 terror attacks. An earlier, failed marriage was to a Pakistani-born doctor, another high-flyer in American academia, who shared her piety but not her extremism.

Ms Scroggins has spent much of the past decade tracking both women and is struck by what she calls the weird symmetry between them. Ms Hirsi Ali could have been an Islamist; as an adolescent in east Africa she was exposed to persuasive activists in the Muslim Brotherhood. Ms Siddiqui could have settled for life as a “Volvo-driving mother of two” as she was described (accurately, in a way) by those who insisted that her detention and trial were unfair. By flipping between the two lives, the book cleverly shows how both women were influenced by successive episodes in history, from the Bosnian war to the New York attacks and the overthrow of the Taliban, gradually becoming protagonists in subsequent events.

Although the book avoids psychobabble, it is tempting to conclude that very personal factors influenced the women’s choices. In Ms Hirsi Ali’s childhood the dominant figure was her father, a rebel leader who was frustratingly absent most of the time. In her own battles, she at once defied and emulated him. In the Siddiqui household, the strongest role model was her mother, a passionate advocate of ultra-conservative Islam and close associate of Pakistan’s most hard-line clerics. Both lives were also affected by the final phase of the cold war. The Siddiquis were part of a wave of Islamist zeal unleashed by Zia ul Haq, a Pakistani general who enjoyed American support as an ally in the anti- Soviet fight in Afghanistan. As opponents of Somalia’s pro-Soviet regime, Ms Hirsi Ali’s family were initially welcomed by pro-Western Saudi Arabia; but when Somalia switched sides, the family had to move to Kenya, where life as an exile remained difficult. The worst features of traditional life, especially domestic violence, were easier to reproduce than any other aspect of Somali culture.

In the introduction, Ms Scroggins says she hopes her meticulous investigation into the two women’s lives (which did not enjoy the collaboration of either) will help her to understand the “deep structure” of the defining conflict of the early 21st century, pitting militant Islam against the West. (Something her subjects share, of course, is that both regard that battle as primordial and non-negotiable.) Some may find the book’s stated intention slightly over-ambitious. But it does add greatly to the understanding of several interlocking conflicts, some grand and geopolitical and others intimate and personal.

from the print edition | Books and arts